And then it was time for Orion to meet the parents…

It was Thanksgiving and Ashlynn couldn’t put it off any longer. Anita extended an invitation for Orion to join them for Thanksgiving dinner and there was no declining the invitation. Orion has to meet the parents.

The meal was quiet. Anita broke the ice.

Anita: “So Orion, you seem like a quiet young man, but don’t be shy- tell us about yourself.”

Ashlynn looked up to the heavens and thought to herself, “He’s doomed.”

Orion: “I’m in the same grade as Ashlynn. Uh, I make mostly A’s? I live in the Uptown district and uh… I really like your daughter and this food is delicious.”

Aiden: “Loosen up, Kid. The guns are all in the safe. Don’t worry, you passed.”

Orion: “Wait? Were you serious about the guns?”

The table fell quiet again, but it was less awkward. Ida looked at the tattoo on Orion’s arm.

Ida: “I see you have a tattoo. Are you eighteen?”

Orion tried to roll his sleeve back down over it.

Aiden tried to stifle a laugh. He just choked on his food for a moment instead.

Orion: “You’re right, Ash. I’m sorry, it was rude of me to lie. The tattoo is real. A friend of mine is studying tattooing and I was his guinea pig.”

Aiden: “Your friend’s not bad. Back when I was in high school a friend of mine got a homemade tattoo from a mutual friend. It was of that stupid little S symbol you make with dots in notebooks. I was never more glad to have turned down a free thing.” 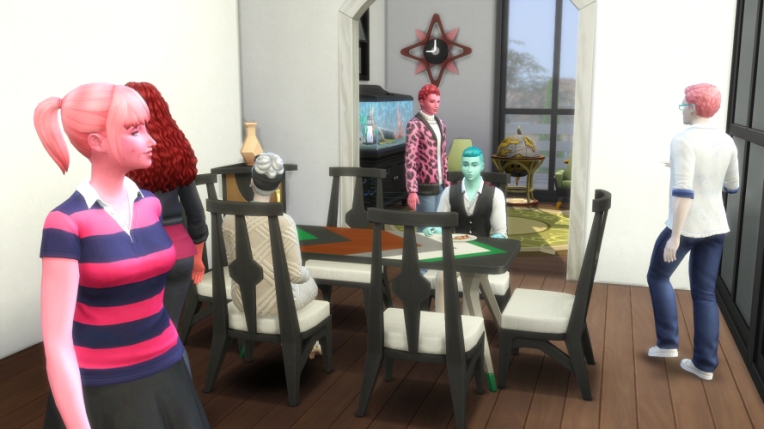 The meal was over and Orion survived. Ashlynn helped with dishes. Aiden put a hand on Orion’s shoulder.

Aiden and Orion moved into the den. Ida followed them in.

Aiden: “So, while Ashlynn is helping her mother… tell me about yourself. And be straight about it this time.”

He sat still and collected his thoughts. He was always uncomfortable around people he didn’t know, but he didn’t have a choice… if things went his way these people would be his family in a few years. He cleared his throat.

Orion: “I don’t know what I want to do after high school. My family owns Fraiser Foundations. My dad wants me to take over the company, but I’m not interested. I’m good at researching and I like to write, so I’m leaning towards that. My family isn’t too happy with that decision.”

Aiden made a sound that was sort of an agreeable grunt.

Ida: “Fraiser Foundations is a garbage company. Another organization looking to increase their profits while the people starve.”

Aiden looked over at his son with a mixture of surprise and pride. Ida was always so straight laced. Aiden didn’t realize how much anti-authority beliefs Ida had inherited. Aiden tried not to smile.

Ashlynn chose this moment to enter the room with Anita.

Ashlynn: “No way. If this is grill people for secrets time, then we have to be cling wrap all the way. Transparent.”

Ashlynn: “Daddy’s last name is Adams. So is Mom’s actually. We just all use Mom’s maiden name for legal stuff cause Dad’s a hardened criminal.”

Anita: “Maybe we should pull back on sharing.”

Ashlynn: “It’s okay. Orion wouldn’t snitch on family. Orion promised me we’d be together forever, so that makes him part of the family.”

Her expression went distant as she tried to remember when Orion had made her that promise, but she couldn’t pinpoint the day. She remembered it vividly like a pleasant day dream.

Orion gazed over at Ashlynn. He remembered the promise he had made her in the dream. He’d spend eternity with her. He could hear his voice ring out the words as clear as if he had really said them.

Orion: “I wasn’t totally straight with you, Mr. Adams. I do know exactly what I’m going to do after high school. I’m going to marry your daughter.”