Amy spent way too much time at Aurora’s place.

It made her do things she normally wouldn’t do… Like wash dishes. Though she did neutralize the effort by then dirtying a plate and leaving it. So there’s that. 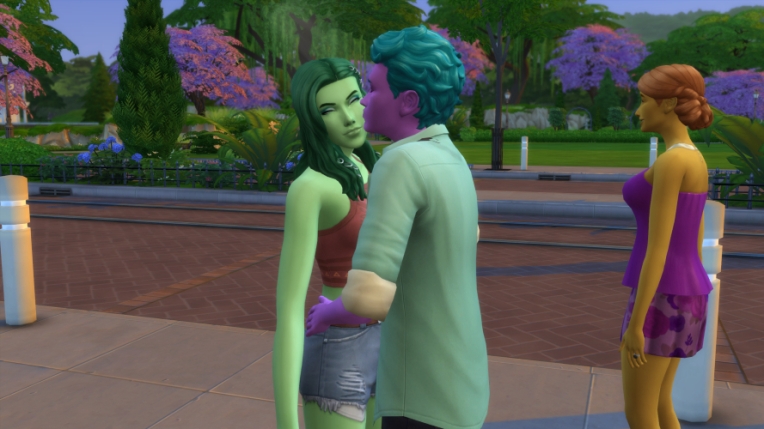 To be greeted by her boyfriend.

They went inside where creepy neighbors weren’t creeping… 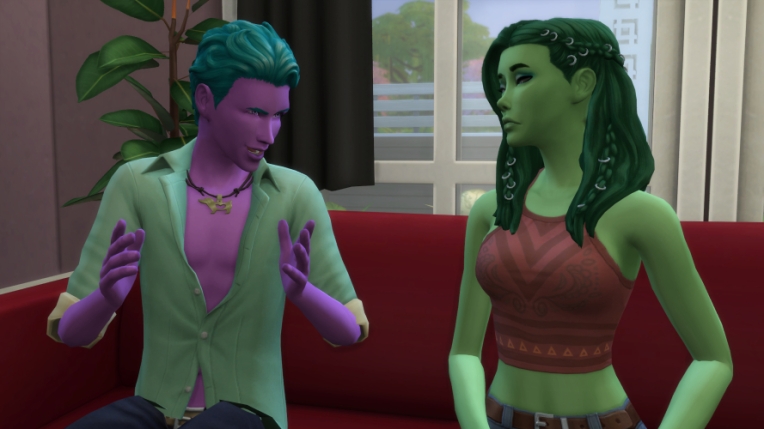 Duane: “And then I told my boss: And if we put in a scale replica of a T-Rex, we could charge people to take pictures in front of it.”

Amy: “You’re so full of shit. You didn’t come up with that plan. You just watched Night at the Museum.”

Duane: “No way, the plot of that movie is nothing like this. Don’t you remember the president with the mustache? He was the star.” 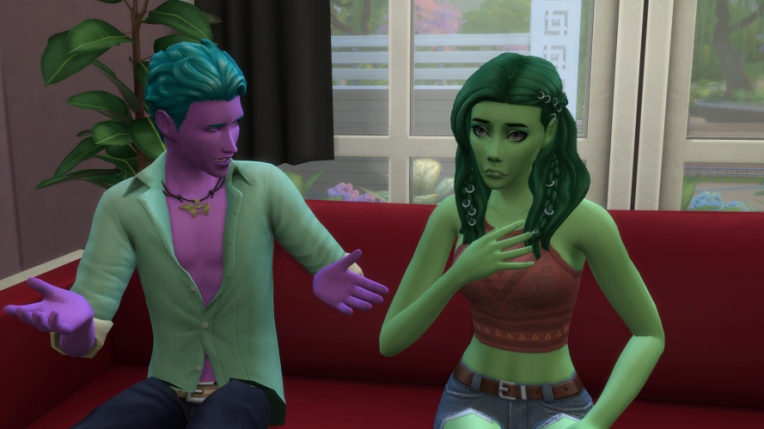 Amy: “Is this a sexual inuendo?”

Duane: “No? I was thinking spaghetti and meatballs for dinner. It’s easy enough to make enough for your army of a family.”

Duane: “Then after dinner you can have my Italian meatballs.”

Duane: “I have no idea… It’s not like Italy has existed for who knows how long.”

Aurora: “Damn! I can’t believe you got knocked up by a vampire. I thought they were dead.”

Cristal: “They aren’t dead. And I wasn’t knocked up… I am still dating him, you know.”

Cristal: “Are you going to invite me in or not?”

Cristal: “You wanna feel your future niece or nephew kick?” 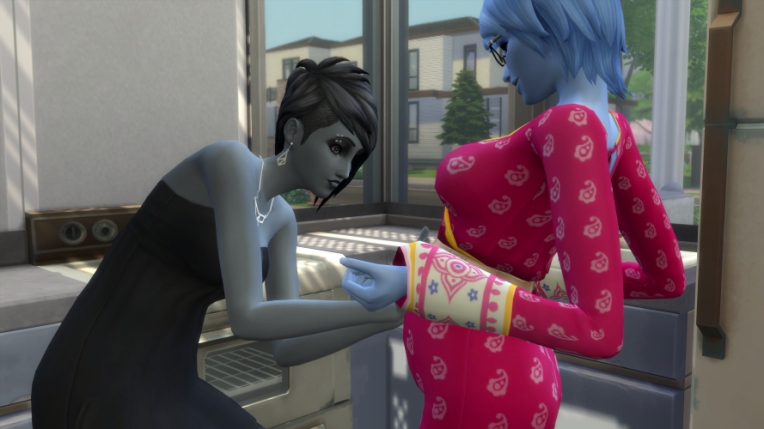 Aurora leaned over and felt her sister’s stomach. Holy crap. Her sister was pregnant… This seemed… unlikely? 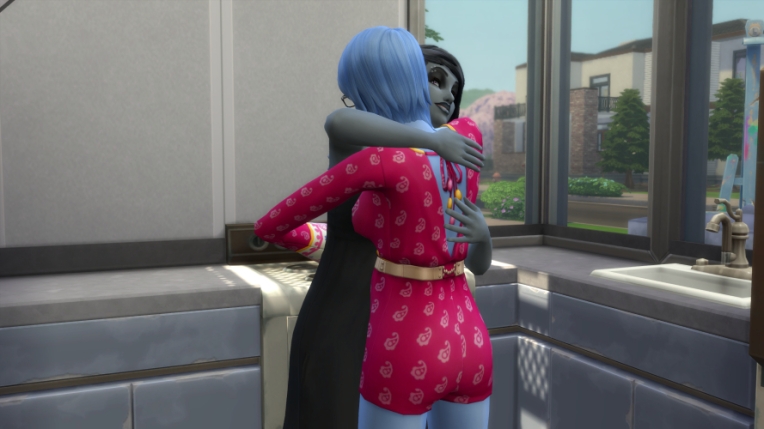 Aurora: “Come here! I never thought you were going to get laid. Much less pregnant!”

Cristal: “I hate you sometime. I’m going to go visit your daughter. Since she’s so much nicer than you.”

Cristal: “So how are you doing, Sweetness?”

Cristal: “Awh okay. Let’s get you down for a nap.”

Emi curled up for her nap and kicked off the blanket as soon as Cristal put it on her.

Once Emily was down for her nap, Cristal came downstairs to hang out with her sister. Cristal’s eyes widened.

Aurora: “Huh? What? Wait… you mean the kitten? That’s Beryl. Austen adopted her the other day.” 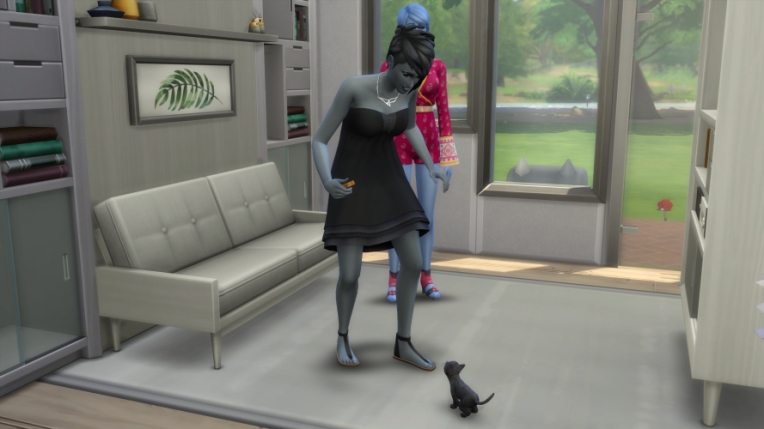 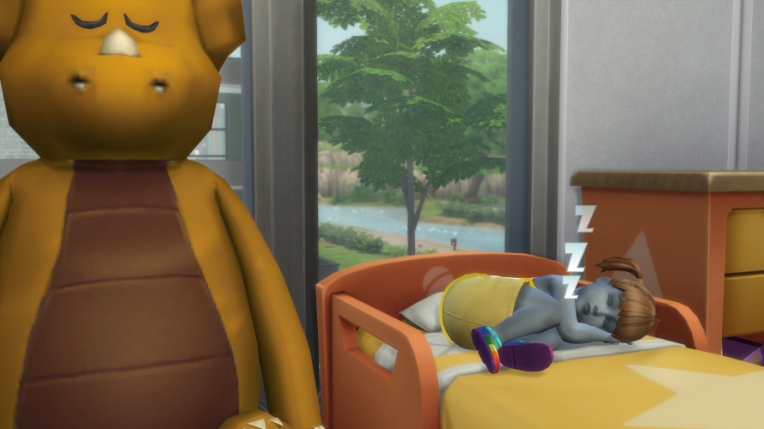 Upstairs, Emily was napping restlessly. She felt strange, but she wasn’t sure why. 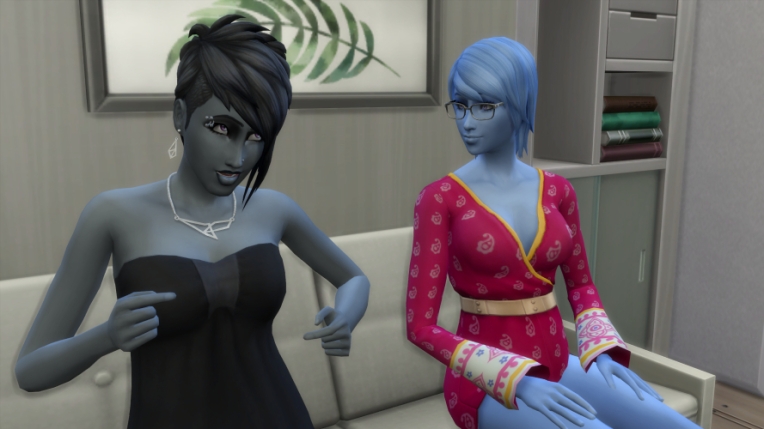 Aurora: “Have you watched that new show on Webflix?”

It was during this pointless conversation that Emily started to cry. She wailed and wailed. Her tiny body wasn’t right.

Aurora bolted out of her seat and raced up the stairs.

Aurora had just made it up the stairs as Emily as climbing out of her bed. Aurora gasped when she saw her daughter.

She raced across the room and threw her arms around the child. Emily was feverish, which was alarming. What was more alarming though was the child’s hair. It was completely devoid of any color at all. Pitch black. Even Aurora’s own hair was a charcoal color.

Aurora tried not to panic or cry. What was happening? The color changing was normal. It had been a known problem for generations, but people didn’t suddenly just lose their color.

Emily was starting to cry again, so Aurora scooped her up.

Aurora: “It’s okay, Little Bean. Mommy is here for you.”

The first chance she got, Aurora called Austen. He didn’t pick up. He must be in the middle of a show. Her next call was to her parents. 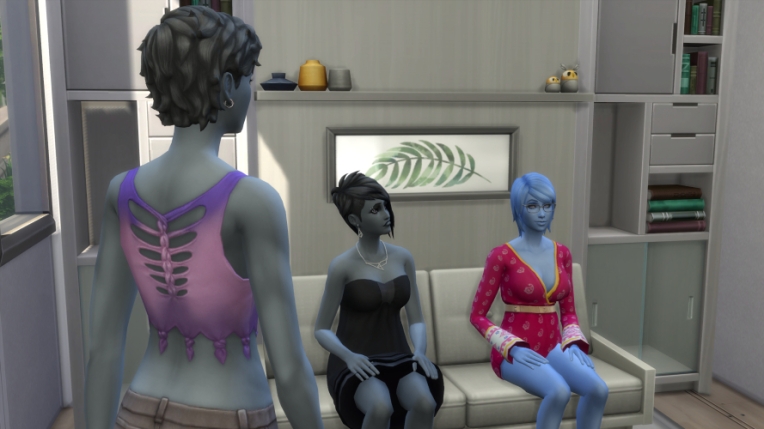 Aurora sniffled on the verge of tears.

Cristal: “We don’t know. We put Emi down for a nap and when she woke up…”

Dorian came downstairs and waved at his daughters.

Dorian: “Emily is asleep again. She seems fine, the fever is gone.”

Izzy: “What about the hair?”

Dorian: “Black as a raven.”

Dorian: “It might be normal. Humans used to have black hair. Maybe it’s nothing.” 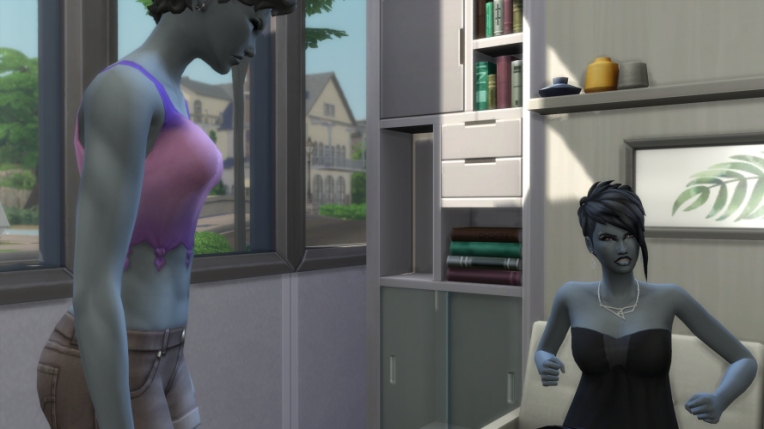 Aurora: “This isn’t nothing Dad! What if-”

Aurora stopped herself before she could say more. The pit in her stomach made her groan in agony. 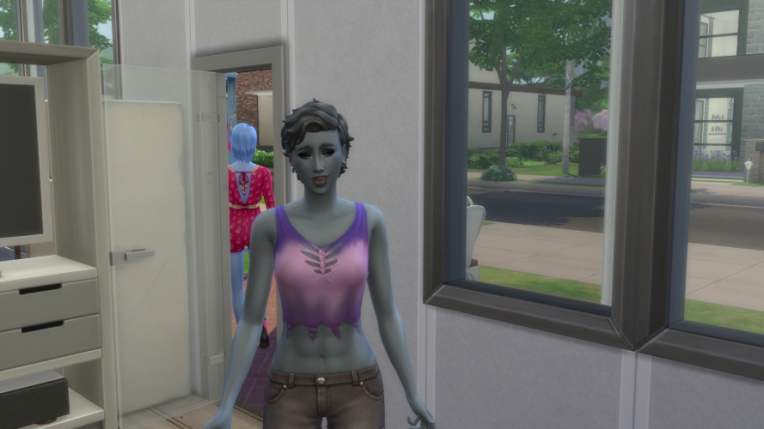 Izzy: “Your father isn’t saying it’s nothing. He just doesn’t want you to make yourself sick worrying. We’ll get her to the doctors to see what they say.”

Cristal needed some air. She was sitting outside when she heard a tiny sniffle. Someone had snuck out of bed and come outside too. 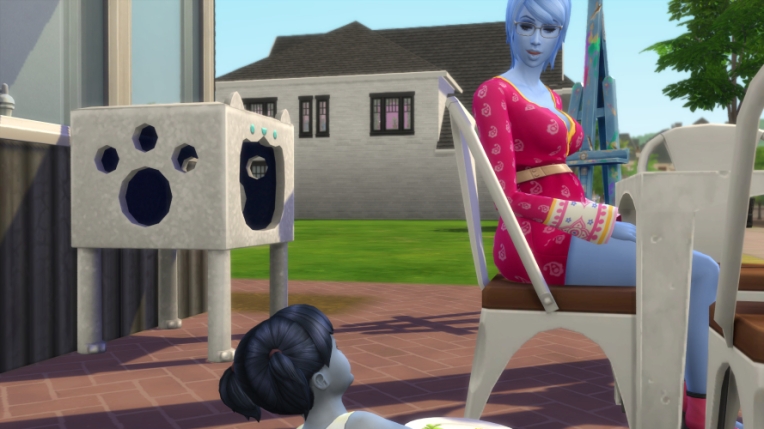 Cristal: “Oh hey Cutie. What are you doing out here.”

Emily babbled. It was a little more of a sad ramble than happy toddler chatter.

Cristal: “Okay, how about we dance?” 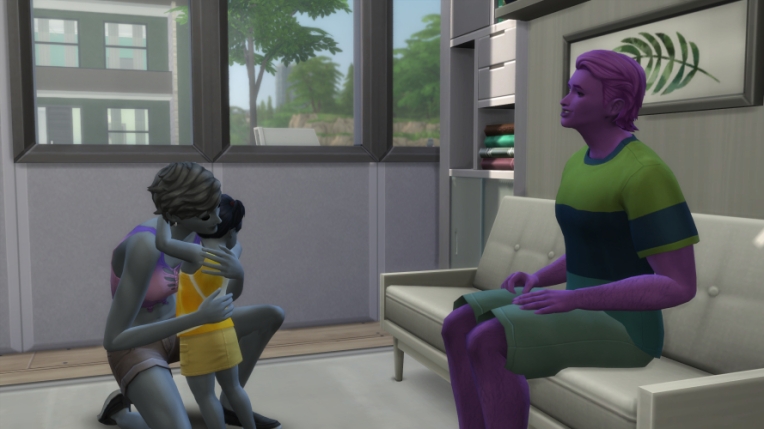 After a few minutes of dancing, Cristal brought the little escapee in. Izzy and Dorian took over pampering their granddaughter.

Dorian was telling lame dad jokes when Austen got home. He took a look at his daughter and scooped her up in his arms. 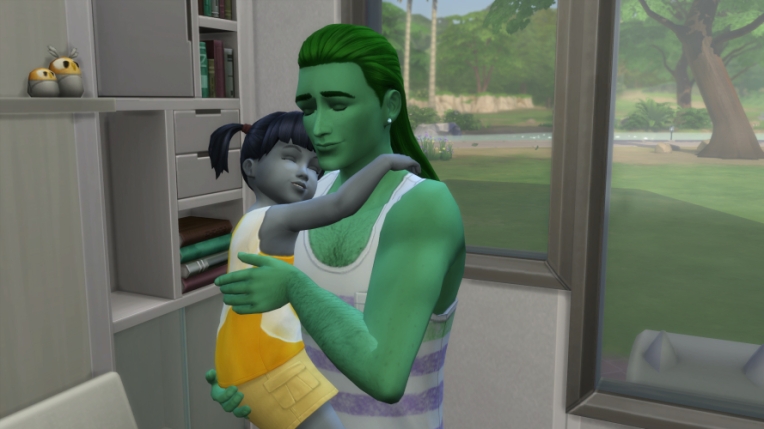 Austen: “I love you so much, Emi. I’m not going to let anything happen to you.”

Austen: “Mommy is packing your bag. Are you ready to see the doctor?”

Austen: “Yeah. They will get you feeling better.” 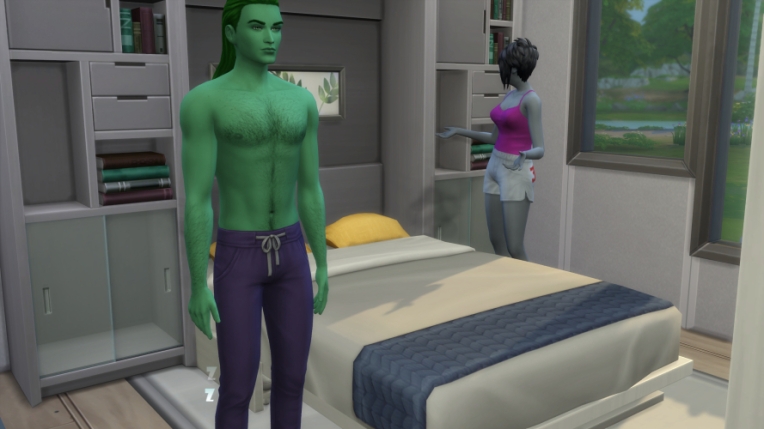 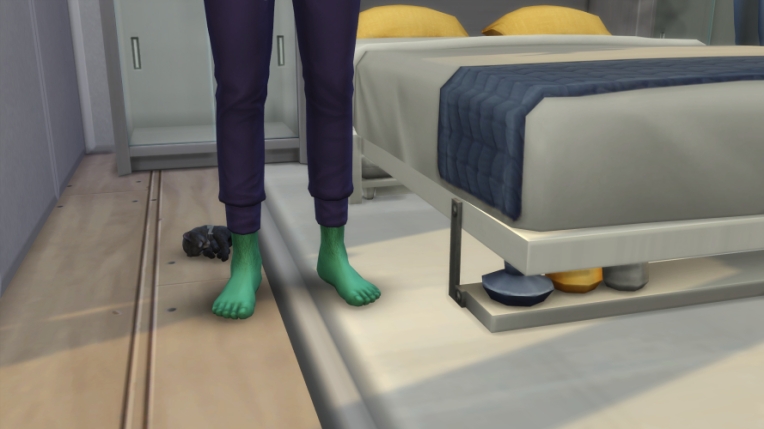 Look at this! This tiny cat is precious! She sleeps next to them on the floor! Poor tiny baby!